It is time for you to relax and sit down and read a modern day fairytale.

Parallel Project Collaboration with the MoMA

The Fairytale of New York 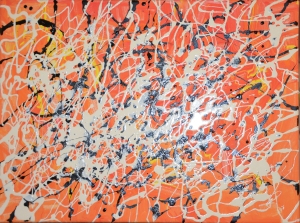 Once upon a time Mickos was doing mundane research on the internet when all of a sudden he came across a Coursera that was run by MoMA. The Coursera involved studying and researching the methods and techniques of the abstract expressionists. Having recently seen the exhibition of the Abstract Impressionists at the Royal Academy, this was of course a subject dear to Mickos’ heart.

Mickos counted his beans, decided he had more than enough and sent some to the good people at MoMA to allow him to study the course.

The course was hard split into weekly units that involved reading, answering questions and doing a painting each week in the style of several abstract expressionist artists. Mickos stuck with it and at the end of the course Mickos was awarded a certificate for all his hard work. 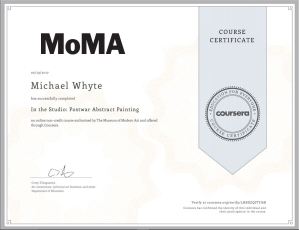 Mickos was proud of his certificate but was just as proud of the works he had produced for the course. Around six months later, when MoMA issued a call for submissions for an exhibition Mickos chose the work he thought the best and submitted it by email. In mid December 2017 Mickos was thrilled to learn that his submission had been accepted for exhibition at the Museum of Modern Art in New York, and that he was invited to the opening reception of the exhibition on the 8th of January 2018.

Mickos looked on the internet quickly and found that tickets to New York were £1800 each and he was sad, but then he remembered that his daughter Loz was an internet wizard. He phoned her and left the problem in her very capable hands.

Some days later Loz rang back to say she had sorted the trip out for both of them for £1200 this pleased Mickos immensely, especially so, because he wasn’t going to be home alone in New York.

The Christmas Holiday intervened which was lucky because a flurry of activity was needed, buying and reading of guidebooks, finding the cold weather clothing, it was after all, going to be minus fourteen in New York, this worried Mickos somewhat but he reasoned that the bars, hotels and the MoMA would be warm.

The weather intervened to close JFK and Mickos and Loz eventually arrived in New York a day late, but in plenty of time for the opening of the Exhibition on the eighth of January.

Mickos and Loz did tourist New York for three days before attending the opening, they were overwhelmed by the 9/11 Museum, delighted by the Met, uplifted by the Empire State and Top of the Rock and cold in Central Park and Times Square. While they were dressing for the opening, Mickos confessed to having butterflies in his stomach, something he hadn’t felt since playing Rugby League as a young man.

A big Yellow Taxi delivered them to the MoMA, where MoMA provided wine, nibbles and speeches to oil the proceedings, Mickos was pleased to meet fellow artists from around the world and discuss art and their practices with them.

If you aren’t too busy and find yourself at a loose end in New York, the exhibition runs until the twenty fifth of January, and as an added bonus, for the same entry fee you can see the “Demoiselles d’Avignon” by Picasso, “Starry Night” by Vincent and a host of other modern masterpieces too numerous to mention, five floors above “Greenberg Contradictions 1”, Mickos is on the low floor, of course, to catch the passing trade.

Despite accepting the accolades of the New York Art World, Mickos was quite busy in New York, after all it is the city that never sleeps, the following sketches were done in New York and the collage was completed shortly after Mickos’ return with material collected during the brief trip. The digital photograph was of course inspired by Cecil Beaton’s work for Vogue in 1951 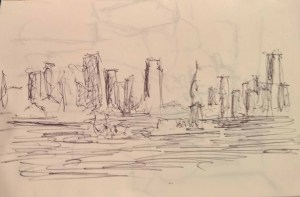 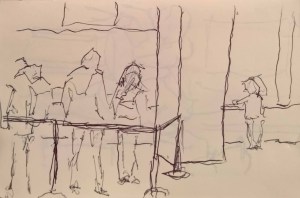 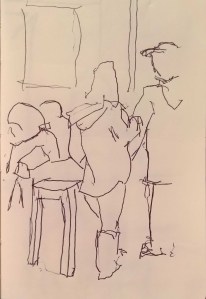 We didn’t get to the happy ever after bit yet but I am sure, after this experience, that it is not far away. Oh and by the way, if you meet anyone that wants to buy a painting that has been exhibited in MoMa by a living artist be sure and give me a call.

My love as always