I was lucky enough to visit the Anselm Kiefer exhibition at the Royal Academy several years ago, the exhibition that course link 19 refers to. I remember the monumentality of it, remember the layers and the straw and the texture of the enormous paintings and the gigantic lead book sculptures.

Notes on Anselm Kiefer in Conversation with Tim Marlow At: https://www.youtube.com/watch?v=vlm5tgistqA  Accessed18/02/19

Are you a history painter in 21st Century? I use history in my paintings almost as a material as a clay to be moulded a traditional history painting is like a photograph of a moment in time. / My paintings have many layers which gives a sense of time. / I use photography in my work as the basis a sketch the process destroys the photograph. /I am not political / I explore recent German history to see how I would have felt about it had I been there / I was discovered by a German Jew / I wouldn’t paint if sometimes I didn’t surprise myself / I don’t seek perfection just the best I can do at the time /I go with the flow / Beuys was an occasional mentor / ritual metaphor and German Romantic history were shared passions / Art and religion are different things but similar / I do lots of reading mainly poetry, it is concentrated like a diamond / My process is to work hard emotionally them I stand back to analyse and see which way the work wants me to go. Each time you make a decision you lose 100 other possibilities. You have to keep going along the path / once the decision is made you can’t go back because the starting point is then lost / Sometimes when I see my work in different settings I realise it is not finished / Looking at the retrospective exhibition I can see connections between what I am doing now and what I was doing 40 years ago. /

I was not a big fan of Marlow’s interview technique, he seemed to be forever leading the witness with his own agenda rather than establishing a conversation, it was a bit like watching a football manager being interviewed in a press conference.

Lui Xiadong chronicles recent Chinese history there is a dearth of information on the internet about this artist so I have ordered the exhibition catalogue from Amazon of the exhibition The Three Gorges Project: Paintings by Liu Xiaodong at the Asian Art Museum of San Francisco in 2005. I will nip back and edit this post when the book has been delivered and I have read it. It does though seem a bit of a shame to research paintings ten meters by three meters in a book.

I had to visit Wrotham in Kent and while I was looking it up on the map in Google I came across this photograph.

I thought it made a good subject for a painting but that the composition was all wrong, the mass of trees needed to be on the opposite side of the picture to hold the eye in the picture. I did a quick compositional and tonal sketch basing the composition loosely around the golden section.

Figure 2 Compositional and tonal sketch Charcoal on A4 cartridge

The assignment called for a study in thick impasto paint, if I used oils it would never dry in time so I chose to do an under painting in acrylic impasto gel. I tinted the gel with some grey acrylic mainly so I could see where it was and with my sketch book in view I roughed in the forms. I left the sky and path areas untouched to contrast with the impasto foliage. 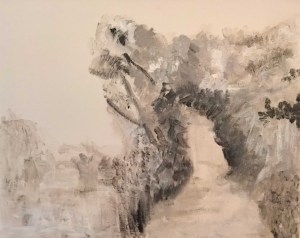 It was great fun working with a palette knife and a one inch brush and eventually parts of the impasto were about a centimetre thick.

Once it was dry, I switched to oil paints, laid in a washy watercolour type wash for the sky and then scumbled and glazed the foliage over the acrylic impasto.

This is a fairly standard landscape easel painting painted on a 500 x 450 canvas,  you can almost feel the wind in the trees and I think much of the energy of the original sketck has ended up in the finished work. I can see the underlying use of the Golden section as a compositional device and perhaps if he were paying more attention as he painted, he would have altered the clouds slightly to accentuate the golden spiral through the clouds as in the diagram below. None the less there are good eye paths through the picture. The mass of foliage on the left hand edge of the picture prevents the eye leaving the work. There are strong varied big shapes for the eye to examine in an abstract way, 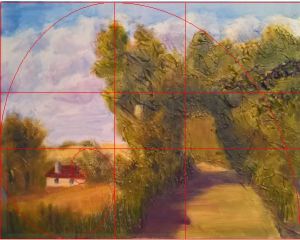 The texture of the foreground works well against the thinly painted sky giving a fine sense of relief somewhat akin to Constable’s sketches for his six footers. The thickness of the impasto would indicate that study has been invested in both Auerbach and possibly Bomberg.

I have taken the liberty of adding a black and white reproduction of the finished work and while generally the tonal patern is good promoting recession I would have liked to see greater tonal definition of the  highlights in the foreground foliage.

The colouring is reminiscent of the French palettes of the late nineteenth century, there is a growing confidence in the use of colour. I suspect that the inner glow of the work is possibly down to the fact that the process involved working on a white canvas rather than a coloured ground.

The foliage and the sky are quite expressively painted with considerable freedom and I suspect great fun was had in the making of this picture.