I have carried on making collages out of each edition of the Sunday Times Magazine and I have read about the historical background of the collage.

Picasso who is credited with the invention of collage was influenced by George Bract who had training in painting and decorating techniques to produce trompe l’oeil wood grain and marble effects with paint.

According to the Tate website the preservation of collages is an absolute nightmare because they are not made out of achievable materials. This is one reason that Picasso stopped making collages, because it is of no use to make an artwork for it to disintegrate within a short period of time.

This is not as much of a problem these days as the collage can continue to exist as a digital photograph long after the original artwork has degraded and provided that you restrain yourself to flat 2 dimensional materials the 2 dimensional digital prints are almost indistinguishable from the original collage and have the benefit of a longer lifespan.

Perhaps the greatest exponent of collage in the 20th Century was Max Ernst, although many of his collage works are not true collages but montages in the Dada tradition. A montage or photo montage is a collage that uses figurative images or parts of figurative images to compose the final image.

The most famous montage of the twentieth century is Just what is it that makes today’s homes so different, so appealing? by Richard Hamilton. The original is small, but it has to be as the images used in the process are culled from a magasine in a similar way that in my own process the source material is culled  from magazines. Matisses collages are so large because his components are manufactured on a large scale by his assistants.

So far I have not resorted to the use of figurative image preferring to experiment with colours, somewhat similar to the approach used by Joseph Albers in his investigations into colours, and the effect that a coloured ground has on the arrangement of colours ripped from the Sunday Times colour supplement and review sections.

There are only three rules to the process, all the collage pieces must be culled from the current edition of the Sunday Times magazine and the ground must be a sheet of A5 card either white of coloured, the use of a black sharpie is optional as the artist sees fit.

The black outline flattens the images, preventing the colours inducing recession and instead any recession is governed by the overlapping of the contoured shapes.

While it feels like a serious experiment there is a massive amount of play involved the collage develops by the addition of further pieces that the existing collage seems to demand and the process stops when the collage is pleasing to my eye. Looking back at them I can understand why I stopped but sometimes I think is it possible to push this one or that one a bit further, so far I have resisted going back into them but that day could come, especially as a printable archive is stored in my computer and the perishable original could serve as the ground for a new work.

At present each original remains as a record of a couple of pleasant hours spent on a Sunday evening and I am not sure as well if I want to dilute that. 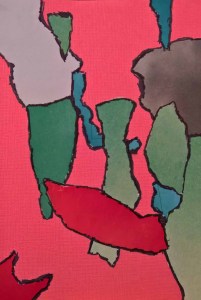 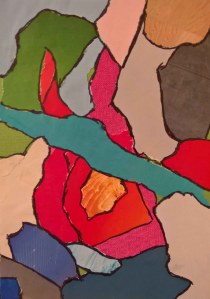 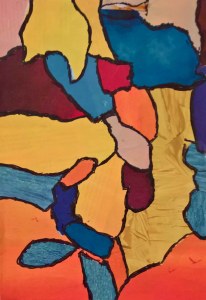