Roland Penrose famously quoted Pablo Picasso saying to Herbert Read when they met at an exhibition of children’s drawings “At their age I could draw like Raphael but I have spent all these years learning to draw like them.” (Petherbridge 415).

The quotation does not reveal the ages of the children whose drawings were being viewed, but Picasso’s earliest surviving drawing Bullfight with Pigeons, done when he was nine, does have a childlike feel to it.

Figure 1 Bullfight with pigeons by Picasso

Probably the reason that the pigeons are so good is that Picasso’s father José Ruiz y Blasco was a painter who specialised in bird paintings and tutored his son in painting from an early age, ignoring the advice from Ruskin “I do not think it advisable to engage a child in any but the most voluntary practice of art,” (Ruskin 1837)

Figure 2 Plaster male Torso 1893 Picasso showing the Bargue heavy shadows where Picasso has chased the light rather than the form influenced by his tutor Isidoro Modesto Brocos.

Here Picasso has retained the classical lightness of the shadows allowing the form to glide around and through them.

By the time Picasso was twelve he was drawing from the cast and the drawings at figure 3 was more akin to the works of Raphael. Picasso claimed to have a classical education it was lucky he received his education in Spain. In France a true classical art education was no longer possible, it had petered out in the nineteenth century, Degas being amongst the last of the classically trained artists. This was mainly due to the fading of the French Academy system and the rise of the Salon de Refuses. With the advent of photography, Impressionism and Bargue’s drawing course, the light rather than the form became more important in art and art education (Leigh 2012). In Spain, however, the classical training of artists persisted and the Bargue influenced drawings produced by Picasso at this time probably emanate from the sketchbook that Picasso was given by Isidoro Modesto Brocos  one of his professors at the Corunna School of Fine Arts who had spent some time in Paris. (Richardson 45)

In the drawing at figure 4 by a youthful Picasso it can be seen that Picasso is searching for the form in the manner of Raphael, ignoring any Bargue influenced light searching that the young Picasso may have been exposed to. 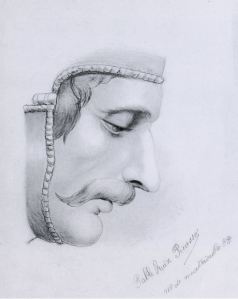 How favourably this compares with the drawing by a youthful Raphael at figure 5 with both artists chasing the form rather than the light. 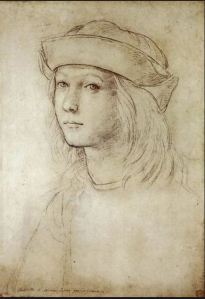 Figure 6 The head and hands of two apostles 1519 Raphael

In what is probably Raphael’s finest drawing at Figure 6, The Heads and Hands of Two Apostles, Maev Kennedy in her review of the 2017 Raphael exhibition at the Ashmolean said “considered by many, including the curators, to be more beautiful than the finished painting in the Vatican, which had to be completed by the artist’s studio after his untimely death” (Kennedy M). Note how light the shadows are compared to the detail of the form of the figures within the shadows.

That Picasso believed himself to be a better artist than Raphael was borne out by his comments to Gertrude Stein following the publication of his portrait of Gertrude Stein beside La Donna Gravida by Raphael in The Burlington Magazine edition 31 by Roger Fry in 1917.

Picasso confided to his friend Gertrude Stein “They say I can draw better than Raphael and probably they are right” (Stein 1938). In his review of the recent Raphael Exhibition, Johnathon James said “Picasso profoundly admired Raphael and the way he painted the pity of war in Guernica owes a lot to his study of  Raphael”

This comparison was made some ten years after Picasso had completed the portrait of Stein. In this work there are no fashionable Bargue and photography influenced dark shadows the form is king, and it is possibly the nearest Picasso came to emulating Raphael.

Picasso’s quote regarding Raphael is akin to comparing apples with Mount San Vittore, or the Beatles with Jesus, whilst each is outstanding in its class, different classes do not bear comparison, greatness may be stood side by side but it is difficult also to compare oneself with the giant upon whose shoulders you are standing. Whilst “Pablo Picasso was one of the world’s greatest draughtsmen,” (Galassi 2011) “Raphael is one of the most exceptional and fascinating draughtsmen of all time” (Whistler et al 2017)

Now, like Picasso, let us concern ourselves with the drawings of children, what was the attraction of drawing like a child to Picasso? By observing how children draw, maybe it is possible to understand something of what Picasso sought.

Much of the research into children’s drawings was carried out in the latter half on the twentieth century and is educationally or psychologically based ignoring the creative aspect. Even though one of the foremost authorities, John Matthews is a practicing artist, who studied child art by observing his children and grandchildren, his research is essentially science based.
The original theory was that the early scribbles of a child are a sensory motor practice only, often “dismissed by adults to be a meaningless result of musculature activity” (Kellogg 1969) the pen moves in an automatic way as the child moves its fist. However the slightly more modern and enlightened theory is that the child is “using visual media for four interrelated purposes; for an investigation of visual and dynamic structure in itself; for the representation of shape; for the representation of movement and for the representation of emotion” (Matthews 1999)

These, however, make the assumption that a child, when first introduced to pen and paper is a tabula rasa, whereas its movements and action have been organised by months of play and interaction with its immediate environment without mentioning the inbuilt DNA inherited from time immemorial or alien about what constitutes art. (Mathews 1999)

It has been suggested that a child’s drawing develops from this early stage to one day in the future when figurative stick people or tadpole people fortuitously appear (Piaget 1951) or that the child repeats successful scribbles and discerns those that form realistic images (Kellogg 1969)
In any case, the study of art directs one along the line that “drawing is not dependent on the linear derivatives of objects” (Rawson 1982), and of course “drawing is not concerned with the representation of objects at all, but is to do with an interplay of forces” (Arnheim 1986) or “drawing is not concerned with shape as such, but with actions and their trace making effects” (Smith 1993). It can be seen, that there is much debate and divergence regarding the psychological and educational aspects of children’s art. There are always conflicting opinions about art and art-making whatever subject area is discussed. To resolve some of my own concerns in this area and as part of the basis of my parallel project I decided to collaborate with my grandson’s developing artistic abilities and observe his progress with the pencil. He is the Artist and I am his curator.

Since Auburn was 12 months old I have observed his progress with pen and paper, his progress was followed avidly from his first marks with the pencil in a fist like grasp when circles seemed to dominate. He is now two and thanks to his Tiger Mum, Auburn can distinguish a line, a circle, a square and a triangle. This does not accord with Ruskin’s views but who am I, his grandfather, to intervene.

Perhaps the greatest pity is that these early childish drawings are never saved or stuck to the fridge, so that a thread of the development of child’s drawings can be established. Auburn will hopefully be in the vanguard of such a tradition in the hope that that should he attract problems in his later life, an analysis of his early year’s drawings would be helpful in this regard.
It must also be remembered that leaving a trace on paper is but one form of drawing and that drawing also consists of dance and three dimensional movements in space and that in developing his drawing skills, Auburn has created a powerful communication tool that far exceeds his verbal skills.

Auburn’s drawing above, produced at the behest of his Tiger Mum, and is a portrait of Granddad Mickos, one Saturday morning, in Costa Coffee. One of the things that Auburn is getting used to is the shape of the target. Notice how his mark making techniques no longer meander off the edge of the page, he did, however, intently make a mark on the front cover of his reading book Noi and the Whale, that elicited howls of derision from the Tiger Mum. Also, as can be seen in the bottom right of the image tadpoles are fortuitously beginning to appear, an obvious display of Auburns discernment. Note also the variation in the pressure of the mark making tool resulting in a wide range of marks, a further example of Auburn’s discernment. The dominance of the push pull movements in the sketch maybe significant of Auburn’s particular awareness of his own developing omnipotent sense of self, or could be an early onset of the terrible two’s.

Not once during the production of the drawing did Auburn look at his model to discern proportion or likeness, this is also part of the practice of both Raphael and Picasso, the drawing came straight out of his head and or his arm. The arm movements described by the experts are all present in this rapid sketch, and from his triumphant gleeful “Granddad Mickos!” as he handed over the sketch, this can only be presumed to be his title of this extremely expressive work. It is the trace he has left of his movements at the table, movements learned over two long years since emerging from the womb, is he dancing at the easel already as Cezanne did? Can a two year old really do this? If you see any resemblance, you could be either related, biased, five and three quarters, Picasso or maybe even Raphael.

A child draws with energy, confidence and conviction and instils a sense of verve and life into the page. Children, Raphael and Picasso do it differently, the whole of life is live, it always works, if it doesn’t work in the eyes of others, change the narrative or insist on the narrative.

There is little doubt that Picasso could, as a result of his artistic training, draw as well as Raphael, but Picasso lived four hundred years after Raphael and it had been almost a hundred years since figurative work had begun to be less important than expressive work.

That Picasso claims to have sought inspiration for his expression in the work of children is of no surprise. In the child there is true expressionism, two gleefully expressed words from a limited vocabulary proclaim Auburn’s expressionism. It is only by watching children draw that we can learn to be truly unique. Picasso knew this, watch them slowly and learn, play is the greatest expression of freedom and genius and of course Picasso was also renowned for his playfulness.

British Museum, The. (s.d.) Collection online. At: http://www.britishmuseum.org/research/collection_online/collection_object_details.aspx?objectId=715573&partId=1&searchText=raimondi+innocents&page=1 (Accessed on 23.10.17.)

Kennedy, M. (2017)‘Extraordinary’ Raphael show to be big draw at Ashmolean in Oxford. At:
https://www.theguardian.com/artanddesign/2017/may/30/extraordinary-raphael-show-drawings-big-draw-ashmolean (Accessed on 23.10.17.)